Stanley N’Soki looks to be closing in on a move to Newcastle United.

The PSG defender was a target for the Magpies during the last summer window, and towards the end of August there was some confidence a deal could be done.

Then everything fell part on deadline say, and the youngster stayed where he was.

Now 20 years of age, the time for a transfer is ripe, and PSG know they can make a reasonable amount of money from Newcastle for a player who has two years of contract left.

Monday’s edition of L’Equipe reports an agreement is ‘close to being found’ between the two clubs. 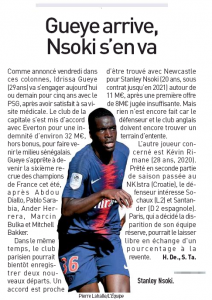 After an initial offer of €8m, which was rejected by the Ligue 1 champions, the French newspaper believes common ground will be found around the €11m mark.

That doesn’t mean a transfer is all sewn up, with L’Equipe explaining Newcastle United and N’Soki’s camp are still to find an agreement on the terms he’d have at the club.