Trying to cover their back in case Harry Kane was sold to Manchester City, Tottenham, led by their director of football Fabio Paratici, decided to look at potential replacements.

One of those was Dusan Vlahovic, who was a shining star at a struggling Fiorentina last year, and there were claims that bids were even made.

They never came to anything, since the Serbian decided to stay and help the club turn things around under Vincenzo Italiano, which he is currently doing.

On top of all this, Fiorentina are trying to renew the 21-year-old, whose contract with the Serie A side runs out in 2023, but his agents are being what the club would call difficult.

Gazzetta dello Sport explain the situation on Tuesday, with the representatives ‘postponing the discussion on the possible new contract to the end of the year’.

This would leave Vlahovic in dangerous territory, with just 18 months left on his current deal, which is why ‘Fiorentina would have great difficulty keeping him and possibly collecting the €70-80m of his minimum valuation’.

Right now, the problem ‘to be solved was and remains the release clause’, which the player’s agents ‘do not intend to raise over €60m’. 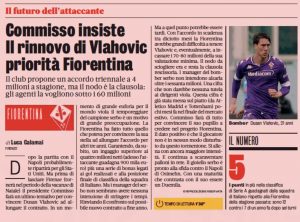 This ‘would not give any protection’ to Fiorentina, because that’s a figure that ‘has already been put on the plane a few months ago in the final of the summer transfer market’, which is when both Atlético Madrid and Tottenham are named as the club having done so.

If the Italians cave in and agree to the demands, it appears Paratici could see a long-time target of his available at an affordable price, thus allowing Spurs to improve their attack in the process, regardless of whether Kane stays or goes.