The Italian media continues to name Raúl Jiménez as one of the top targets for Juventus in this transfer window.

Newspaper Tuttosport today lists four strikers who the Old Lady are chasing, and the Wolverhampton Wanderers is star is the first to be highlighted.

It’s once again claimed that Cristiano Ronaldo would like to have Jiménez by his side, and agent Jorge Mendes would do his best to please his biggest client.

The representative is expected to ‘do the impossible’ in the coming days, since this isn’t an easy deal for Juventus. 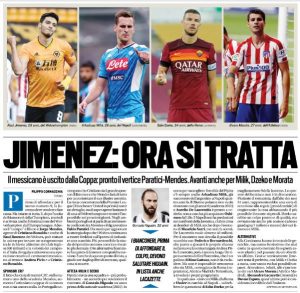 The first issue for the Old Lady is the competition, which is ‘not a detail’. There’s also the obvious issue about Jiménez’s price.

Tuttosport says Wolves have been ‘cold’ about a potential swap, so Jorge Mendes would have to find a solution to make the transfer affordable. Two of the options would be a loan with an obligatory buying clause, or selling  another star to make this investment.

The other targets Juventus are said to have are Arkadiusz Milik, Edin Dzeko and Álvaro Morata.