Marseille are having a torrid period, it’s a full crisis situation for the French club, so to consider that Clinton Njie can’t really get a look in at the moment doesn’t bode well.

The Ligue 1 side are happy to see the back of the former Tottenham player, it would be considered a rare piece of goos news for them report L’Equipe in their Friday edition.

N’Jie, 25 years of age, has started just two Ligue 1 games so far this season, picking up 177 minutes including his substitute appearances.

From that limited time he has one goal, but that came in September and during a 4-2 defeat to rivals Lyon, it didn’t really mean anything.

In fact, the most interesting thing to have happened to the player since he signed for Spurs is perhaps the loss of an apostrophe, going from N’Jie to Njie.

Anyway, agent William McKay, a long time associate of Marseille and also with a history of West Ham dealings, is said to be finding the player a new home in the Premier League… 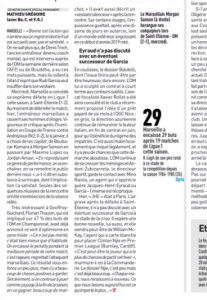 with Burnley and Cardiff City named as the options.

It may all go amazingly, Njie could rock up at Burnley or Cardiff and be the spell to make relegation worries drift off into space, but it’s a long shot.

At least a deal would likely be on the terms of the signing club.

If West Ham didn’t have a manager with such a strong position as Manuel Pellegrini seems to hold at the club right now, then there’s a good chance Njie would be returning to London.