On Monday evening, Spanish newspaper AS stepped forward with the story that Chelsea were working to sign Kepa. That came not long after claims the Premier League club were keen on Jan Oblak.

On Tuesday, much of the Spanish media insisted it was all true. Chelsea had gone for both players as potential Thibaut Courtois replacements, but Oblak had said no, and Kepa was thinking about it.

That thinking about it then turned into a ‘yes’, and the wheels of a transfer were put in motion.

Wednesday’s edition of Marca explains what has already happened and what will happen, as far as they have it.

Kepa ‘will have breakfast in Madrid and sleep in London’, after deciding at noon yesterday that the Chelsea approach was just too good to turn down.

The goalkeeper flew to the capital accompanied by Margarita Garay, director of Bahía Internacional, which is one of the biggest football agencies in Spain. Marca have it slightly differently from some and say Kepa will first have a medical and then Chelsea will deposit his €80m buyout clause at La Liga’s offices. 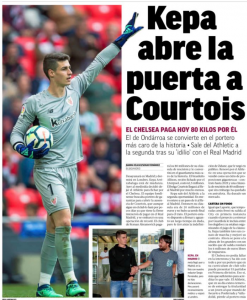 Athletic Club Bilbao have refused to negotiate, as expected.

Once that is sorted out, and Chelsea have lawyers in Madrid waiting to smooth everything through, Kepa will fly to London on a private jet with several of those closest to him.

The intention is that Chelsea will present the goalkeeper on Thursday.