Catalan newspaper Mundo Deportivo loves writing about players who want to join Barcelona. In recent years the Catalan club have been at the top of football’s tree and so a lot of the claims have probably had truth behind them.

Step forward Julian Draxler. Not for the first time the Catalan media say Draxler has been holding out for a Barcelona move but was rejected by the club.

Mundo Deportivo claim the PSG player got his agent to stall several English clubs, with Arsenal leading the race, because he wanted to wait for Barca. However, Barca’s answer was a straight ‘Thanks, but no thanks’, and Draxler then missed Arsenal and others and remained at PSG.

Draxler was one of the players pushed forward by the French press as being expendable at PSG this summer, that he’s stayed doesn’t guarantee game time.

With Edinson Cavani upfront, Kylian Mbappe and Neymar are expected to play off him. Unless PSG find a role for Draxler further back, then he’s going to be picking up scraps. That makes a January move all the more possible. 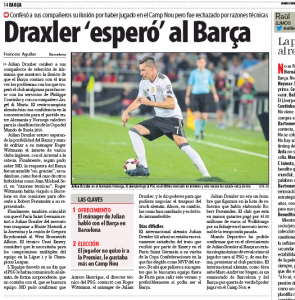 Should Draxler get the message he’s not important enough at PSG then a winter exit is increasingly attractive, especially with the World Cup on the horizon. That would provide Arsenal with a good chance of signing the player.

Draxler is one of those players who, having been linked with Arsenal for years, will likely continue to be for all eternity, but if the interest is genuine… there’s a chance on the horizon for Arsene Wenger.