That Benfica may be signing a Manchester City player next summer has obviously became a big thing in the Portuguese media.

All the big sports newspapers A Bola, Record and O Jogo have stories about Javairô Dilrosun today, showing a lot of excitement with this possibility.

What A Bola and Record have to say is basically the same. They claim the player is well rated by Benfica’s scouting department, and the Portuguese side are seriously thinking about trying to bring him to Lisbon.

With the youngster’s contract with Manchester City expiring at the end of the season, the only thing Benfica are afraid of is the competition he may attract. 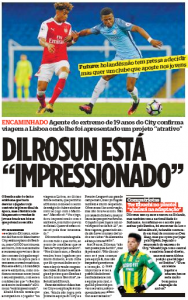 Now the one who seems to be really on the money is O Jogo.

Yesterday, they reported that Dilrosun had already visited Benfica and even turned down Manchester City’s offer to renew his contract. Today, his agent spoke to the newspaper and confirmed part of the story.

Khalid Sinouh revealed that he accompanied the player “on the trip to Lisbon last weekend that allowed Dilrosun to discover the club’s training centre and also watch the game with Marítimo.”

“He watched the game, was impressed with the environment, with everything he saw in Seixal. Anyone who sees these things can only be interested,” the representative told O Jogo.

“He has not played for Manchester City’s first team yet and the Premier League is a great league, but the Portuguese is also very respected. They offered him a renewal, but there was no agreement. Not because of money, but because of future prospects. The player wants to play at a higher level than the under-23.”

Sinouh also claimed the player “is not on a hurry” to decide his next club, while there are sides “from France and Germany” who are after him.

After all these quotes, it really seems unlikely that Manchester City will keep Dilrosun unless Pep Guardiola offers him a place in the first team squad.