Samuel Umtiti has three years left on his contract at Barcelona and his current deal has a release clause of €60m. For the past few months, the La Liga winners wanted to tie down their defender to a new deal so they can increase the player’s clause.

The delay in the France international agreeing to an extension was because Barcelona were unwilling to meet his high salary demands. He wanted a salary that was close to what Gerard Pique and Sergio Busquets are currently earning at the club.

Barcelona and Umtiti’s representative have opened talks in the past few days and CEO Òscar Grau is leading the negotiations with Canales. The player and the Spanish champions have now changed their stance and the Camp Nou outfit are willing to hand an improved financial package.

The latest offer is still not close to what Umtiti had initially demanded, but Canales is satisfied with Barcelona’s proposal. He remains hopeful that his client can agree in principle to what his employers have offered. 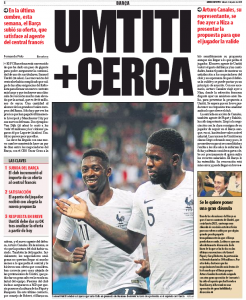 The France international started in his side’s -1 victory over Italy in a friendly fixture in Nice. Umtiti’s agent travelled to Nice to submit Barcelona’s latest proposal and it is now up to the 24-year-old to validate the offer.

It should be seen whether Canales can convince Umtiti to take the offer. If so, then Barcelona will be hoping to seal his future before the start of the 2018 World Cup.