The agent for Sevilla striker Youssef En-Nesyri has revealed he was close to joining Brighton and Hove Albion in the past.

En-Nesyri has burst onto the scene with Sevilla this season, scoring 18 goals in 38 games in La Liga as well as six goals in eight games in the Champions League.

That tally in La Liga meant he was the fifth-highest scorer in the division, and that has not gone unnoticed around Europe.

He was heavily linked with a move to West Ham in the January transfer window, and it was felt that they would return with vigour this summer.

A move to England has now been ruled out, though, with En-Nesyri’s agent making it clear that the striker will be remaining in Spain.

It means a switch to the Premier League has been cancelled for the second time in his career, with it recently revealed he had a trial with Chelsea earlier in his career.

Now we can add a third opportunity missed, with his agent revealing Brighton once had everything sorted for a move.

“Did you know that En-Nesyri had arranged a move to Brighton?” he told ABC Sevilla.

“He got his visa from England and had the club’s authorisation to travel! It was in the summer of 2019. He was being paid more than three times as much as at Leganés. 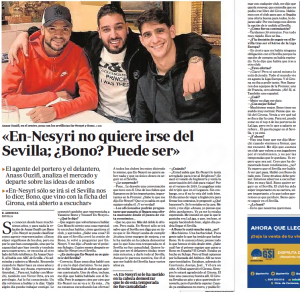 “However, I didn’t see it as a good fit for him. The day before he went to England to sign the contracts, I asked him: “What are we doing?”

“You could see it on his face. He looked at me and said: “Anass, I think I should stay”.

“I was already expecting it. He insisted to me that what he liked was La Liga and that, if he continued to do well, one day Sevilla could come.”