Some months ago, Dutch newspaper De Telegraaf presented Donny van de Beek moving to Real Madrid as nearly a sure thing. That wasn’t then reflected in the media closest to the Spanish club, who explained that whilst the Dutchman was an option, and a player of interest, that’s all it was.

On Sunday, De Telegraaf reported Manchester United have started to make moves to sign Ajax star, and that they could stage a ‘robbery’ and snatch the player from Madrid’s clutches.

Monday’s edition of Marca gives their version. It’s claimed Van de Beek and his agent have presented Manchester United’s interest to Real Madrid, presumably to try and make the La Liga side compete with them.

They were met with a very straight: “We’re not signing anyone.”

Marca state that as it stands, there’s no plans at Real Madrid to make big signings this summer. They did have talks at one stage last year over Van de Beek, but those didn’t go 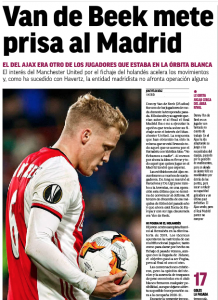 any further than him being an option for them.

Given all of that, Manchester United have a clear road to signing the player. However, it could be questionable whether claims of their interest are as wobbly as those which covered Real Madrid.