Home Europe Newcastle have ‘positioned themselves’ for signing – Agent at work, and ‘playing...
SHARE

Ousmane Dembélé’s contract expires in 2022 and as the winger decides against accepting Barcelona’s renewal offer, he continues to be linked to other clubs, including Newcastle United.

A week ago, the Catalan media reported the Magpies are in pole position to sign the 24-year-old, who has received an ‘astronomical proposal’ from Newcastle, to join them as a free agent next summer.

On Wednesday, Mundo Deportivo stated the La Liga side have issued a 15-day ultimatum to the former Borussia Dortmund man to make a decision on his future.

This is again mentioned in today’s edition of the same newspaper, who then provide more information on this case.

Dembélé’s refusal to respond to the Spanish club’s proposal is ‘already beginning to tire’ Barca. He has ‘serious doubts’ over accepting the renewal offer, while his agent, Moussa Sissoko, keeps insisting the player can earn more elsewhere.

Mundo say Sissoko is ‘playing with the interest’ of Newcastle, who have ‘positioned themselves’ to sign the France international. The report adds Eddie Howe’s side, however, have not sent a ‘firm proposal’ to Barcelona for Dembélé’s transfer in the winter market.

The newspaper further states: ‘He [Sissoko] knows that Dembélé is important in a critical 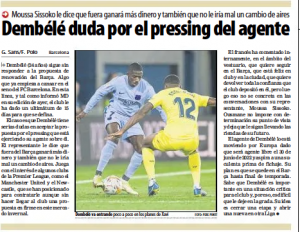 situation for the club and, therefore, it is difficult for him to leave him in the stands. His idea is to close a stage and open a new one in another league.’

It hardly makes sense for Newcastle to make an offer in January, considering they can sign Dembélé for nothing next summer, unless they see him as their saviour from relegation.