Within the report, it’s explained the two players could be a ‘free shot’ for Barcelona in the summer.

The La Liga side are in process of electing Josep Maria Bartomeu’s successor after the latter stepped down as the club’s president.

Unlike past campaigns, the presidential candidates are not making ‘promises of glittering signings’ due to the Covid-19 crisis impacting football.

The situation is ‘aggravated’ for the Catalan club, given their ‘income from ticketing and merchandising sales has plummeted due to the absence of tourism in Barcelona’.

Therefore, the presidential candidates are already looking at the possibilities of working on low-cost transfers or even taking players for free.

Agüero’s current deal at the Etihad expires in the summer and Mundo states the Citizens ‘do not intend’ to offer the forward a new contract.

Hence, the striker is ‘looking for a way out’ and it’s claimed the Manchester City player’s agent has offered his client to Barca’s presidential candidates.

The Spanish club looked at the South American before they look Luis Suárez from Liverpool in 2014. 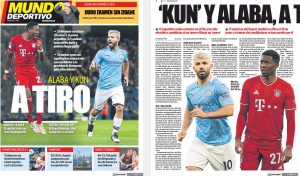 front and his arrival could also help them in retaining Agüero’s close friend Lionel Messi beyond this season.

Agüero, who has struggled with injuries this season, is currently self isolating after testing positive for Covid-19 earlier this week.