On Thursday, we covered a story from Gazzetta dello Sport explaining the situation surrounding Hakan Çalhanoğlu, his contract and an alleged Manchester United interest.

The newspaper revealed Milan and the midfielder’s representatives were some way off reaching an agreement, with the Serie A club’s offer about half of what Gordon Stipic is asking for his client.

That opened the door for interested parties, with Manchester United mentioned in brackets as one of them, to make an approach in January if they so wish since Çalhanoğlu’s deal expires next summer.

Most of this is corroborated by Tuttosport on Friday, claiming Milan’s offer is of €3.5m/year with bonuses capable of taking it up to €4m, while Stipic wants €7m guaranteed.

This is described as a ‘monstrous figure’, which only Zlatan Ibrahimović earns at the San Siro, and would likely exceed anything given to Gianluigi Donnarumma to tie the goalkeeper down.

Çalhanoğlu and his agent believe they’re worth that, and the feeling within the player’s camp is Milan are simply scared to lose a strongly performing asset for nothing, hence why they’ve come forward with a renewal offer after months of silence.

Thus, Tuttosport explain the €7m request is basically Stipic asking: ‘Do you want us to stay? If so, here are our conditions or we’re leaving on a free’. 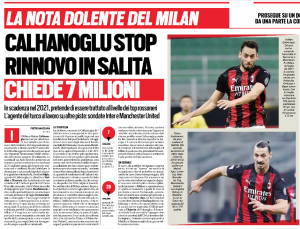 Where do Manchester United come into all this, we hear you ask? The Italian newspaper reveal the agent ‘has proposed his client to several clubs, including Inter and Manchester United, but has not yet received positive signals for the contractual parameters he’d like to achieve’.

As things stand, the more weeks go by, the higher the risk of Çalhanoğlu leaving on a free at the end of the season.

Basically, if this is to be believed, Ed Woodward and co. have been approached by Stipic, but they aren’t prepared to just say yes to his demands for the sake of a free transfer.

It seems the opportunity to acquire Çalhanoğlu is there, and, depending on how the season goes and whether or not he agrees to stay at Milan, it’s one Manchester United could always fall back on if needs be.