Home Europe Agent offered his client, a Manchester United player, to another club this...
SHARE

Several reports during the second half of last season suggested that Paul Pogba’s future at Manchester United is uncertain.

It’s no surprise he’s been linked with moves away from Old Trafford in the summer transfer window.

Mundo Deportivo claim the France international’s agent Mino Raiola was spotted in Barcelona a few days ago, which drew attention. There was a reason for the super agent’s visit, which was discuss players he represents.

The report claims Barcelona are aware that Pogba is ‘not comfortable’ with the 20-time English champions and would be open to the idea of leaving his current employers. He is currently representing France at the 2018 World Cup, where they will face Croatia in the final in a few hours. 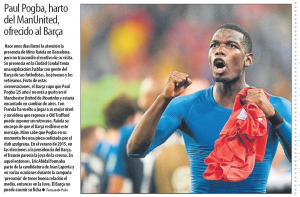 Pogba is playing some of his best football for the national side and Mundo Deportivo claims that returning to Manchester United will now be considered a setback, which is perhaps a little dramatic. Raiola, during his recent visit, made sure that Barcelona received this message.

It is unlikely that Jose Mourinho and the Red Devils will allow the star midfielder to leave United this summer.