On December 21st, we covered claims made by journalist Gerard Romero that Tottenham Hotspur will ‘return to the charge’ for Barcelona defender Clément Lenglet in the winter market.

He had also explained the north London club made an offer for the 25-year-old in the last window, but the centre-back turned down an opportunity to join Spurs. .

The report stated Tottenham have been ‘dreaming for a long time’ about the France international.

After Romero reported about the English club are planning to make an attempt for the La Liga player, Mundo Deportivo decided to get in touch with his representatives for an update.

Lenglet’s agent told the newspaper they have ‘not received news’ from the Catalan club about the interest from Antonio Conte’s side in their client. 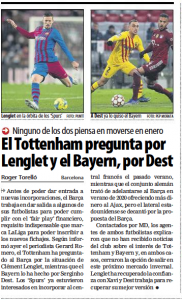 In addition to that, the agent also ‘closed the option to leave’ Barcelona in the upcoming window.

Mundo add the player has ‘regained confidence’ with Xavi Hernández, but he has made only two league starts since the Spaniard took charge at the Camp Nou last month.