Manchester City’s chase for Argentine wonderkid Thiago Almada continues, and the Portuguese press won’t miss a detail of it.

Record’s update on the story today says the player has been ‘applying pressure’ to leave Velez Sarsfield, given the club’s wishes to keep him for longer.

The main reason for that headline is a picture posted by Almada’s agent Augustin Jimenez. He’s posed next to Pep Guardiola.

The representative, who’s the one negotiating with Velez, has later deleted the photo, but that was seen as a clear message of his will regarding the situation. 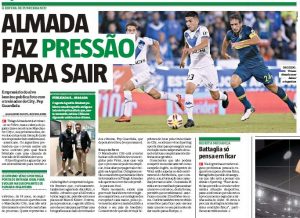 Record claims that Manchester City are currently negotiating to pay less than the €16m demanded by Velez, which is the player’s release clause.

But given the interest from other clubs in Almada, it’s now more likely that Pep Guardiola’s side will pay the price not to run the risk of missing out on the signing.

After signing him, Manchester City would loan him out to Sporting. This is a plan accepted by the player, who sees the Portuguese side as a good place for him to develop.