24Sata have a big feature on Friday headlined ‘SOS Vlasic’, which shows how they feel about the Everton forward’s situation.

The Croatian newspaper explains things were supposed to be very different this summer. After a year settling in, this would be the time that Nikola Vlasic would start becoming an important player for Everton.

Things haven’t quite worked out like that and the player’s situation got progressively worse last season. It led to Vlasic losing his chance of making it to Croatia’s World Cup squad, but even then there was hope for the summer.

With Marco Silva being a manager who has done well with young players previously, his appointment was seen as a ‘good sign’ but ‘unfortunately nothing changed’.

24Sata say that when Vlasic realised this he spoke to Silva and asked to be allowed to go out on loan so he could get games, but this just ‘overcomplicated the situation’.

Sources close to the player are cited as explaining that from that moment things got worse. This week it was revealed that Vlasic is one of a number of players Everton aren’t requiring to train with the main squad, and the 20 year old was ‘most surprised’ by this decision. 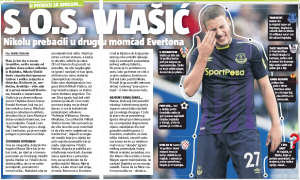 The problem now comes with finding a new team, with it being claimed Everton don’t want to insert a buying clause in any loan. Worried that Vlasic could then come good and leave for a knockdown fee, the Toffees want a straight loan.

This is making it harder for the player’s agent to find a suitable destination, because clubs don’t want to develop Vlasic only to see Everton then get the benefit.