The English striker will become a free agent at the end of the season, and he’s now able to speak with clubs from overseas with regards to a pre-contract agreement.

Besiktas’ board have reportedly held talks with Davis’ agent and asked about the player’s terms, and Posta report both sides will hold further discussions this week.

It’s reported Black Eagles’ manager Sergen Yalcin is a big fan of the Aston Villa attacker and wants this transfer to be completed. 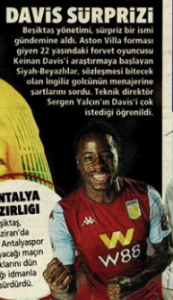 Besiktas are in the market for a forward to provide a backup to club veteran Burak Yilmaz, and Davis could be a good addition to their squad.

They’ve also been linked with Everton’s Cenk Tosun, but it’s unlikely he would return to the Super Lig if other options are available.

The 22 year old has made 13 appearances in all competitions for Dean Smith’s this season, scoring one goal.