Earlier this year, Nélson Semedo decided against extending his contract at Barcelona and was expected to leave the Camp Nou this summer.

Manchester City and Juventus have been credited with an interest in the right-back.

On June 1st, we covered claims made in Spain that Pep Guardiola’s side are ‘best placed’ to take the Portugal international.

Monday’s edition of Sport states the La Liga winners had given the 26-year-old’s representative, Jorge Mendes, authorisation to negotiate with other clubs. The super-agent was convinced he could get an offer of over €40m for his client.

It’s claimed Mendes held conversations with City and Juve and the idea was to include Semedo as a part of a swap deal.

It’s claimed Manchester City were open to the idea of signing the Barca defender, but they wanted to send João Cancelo in the opposite direction. However, this option doesn’t please the Catalan club. 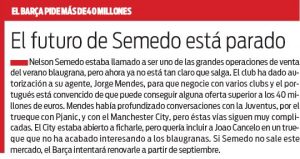 Mundo Deportivo, the other Catalan sport newspaper, have said on repeat occasions that it’s been Mendes trying to push the player towards City, rather than the English club trying for the transfer.