It seems that West Ham didn’t have a big competition to land Lucas Perez from Arsenal this summer.

Even though the Portuguese press had several stories saying that Sporting were pushing hard to land the striker, the player’s agent has denied that there were negotiations with the Lisbon side.

Quoted by newspaper Record today, Rodrigo Lovelle said: “Sporting may even have negotiated with Arsenal, but no one spoke to us.

“The negotiations with West Ham are very advanced, and I bet the deal will be closed.” 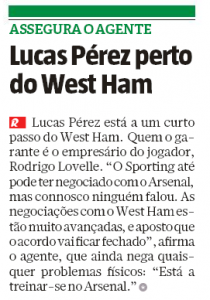 To be fair to the Portuguese press, they never really claimed that there were direct negotiations with Pérez. They only claimed that it would be pretty hard to convince the player to move to Portugal.

Earlier today, speaking to Sport Witness, the agent has confirmed that a deal with West Ham has been agreed, and Perez should move to East London on a three-year deal.