Now that Umaro Embalo’s transfer from Benfica to RB Leipzig seems certain, his agent has confirmed Manchester United was one of the clubs who bid for him during the race.

As you may recall, there were even news saying there was an agreement between the Eagles and the Red Devils for the move in November.

But the papers were wrong, the battle continued, and now the 16-year-old attacker is very close to joining the German side in a €20m deal.

Embalo’s agent has spoken to Portuguese newspaper O Jogo this Friday, and explained which ‘European giants’ were after his client in the past few months, 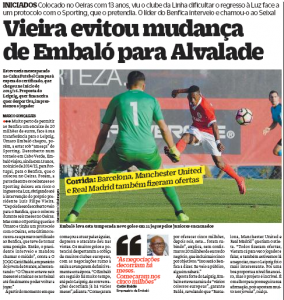 Catio Balde said that “Barcelona, Manchester United and Real Madrid” were in the competition, and added that “they all made offers, came here to see the player and talk, and we were also there to negotiate, but Leipzig was the most interesting. It was a good financial offer, but the project is incredible.”

Reports from Portugal have recently claimed that Manchester United did not want to pay over €5m for a 16-year-old, and that’s why they were easily beaten by RB Leipzig.