The player will become a free agent at the end of the month and has also been linked with Fulham’s West London rivals Queens Park Rangers.

Taka have spoken to Mokhtar’s agent Sezer Ozkan and he’s confirmed Fulham’s interest in the QPR linked forward: “Trabzonspor are looking for cheaper players, we know that. Youness’ contract expires so he’s free to join the club. Premier League side Fulham are also interested in him.

“I gave him a lot of information about Trabzonspor. He’s keen on the move. He’s likely to require less than €1m per season from the club, so it’s a very good price.”

With Fulham’s promotion to the Premier League last week they will be looking to bolster their squad this summer, but they’ll need to move quickly due to the strong interest from the Turkish club, and also QPR. 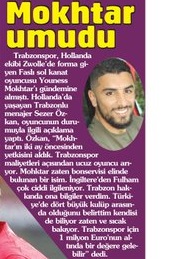 Last month we covered reports from the Dutch media that QPR are monitoring the situation with Mokhtar and could move in on the Utrecht born player.