Fulham’s need to bolster their defence in the last transfer window saw them make bids for a handful of centre-backs.

Jean-Clair Todibo was identified as one of the targets and the Cottagers seemed to have ‘more options’ to sign the 20-year-old in the summer, according to Sport.

It’s claimed Scott Parker’s side even offered a proposal worth €18m to acquire Todibo’s services.

However, he did not want to ‘try the Premier League adventure’ and ‘refused to leave’ the La Liga side for Fulham.

Therefore, super-agent Jorge Mendes ‘appeared’ to take the former Toulouse man to Benfica on deadline day. He joined the Portuguese side on a loan deal, which also included an option to buy for €20m.

Todibo hasn’t played a minute for Benfica since joining them on a temporary deal in October, and their manager, Jorge Jesus has now been highly critical about the Barca owned player.

“He doesn’t have the physical or the tactical conditions. He’s not worked with the team. He’s not one of the players I am thinking of,” Jesus said about Todibo.

Reports in Portugal are now stating the player will be allowed to return to the Camp Nou in January. 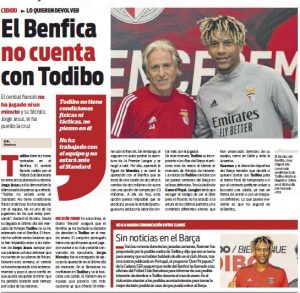 Should his loan deal be terminated, Ronald Koeman’s side will have to take a decision whether to retain him or send him out again in the winter market.

Given how things have developed for Todibo in the past few months, Fulham will probably be delighted they missed out on this one.