After weeks of seemingly non stop back and forth between Italy and England for Fali Ramadani, the number of articles being published regarding Kalidou Koulibaly to Manchester City have dwindled considerably.

The feeling surrounding the transfer was one moving away from it potentially getting done, but the player’s agent may have just kick started it all again.

That’s according to Corriere del Mezzogiorno, who explain Ramadani has managed to get ‘another ten days to try and bring the Senegalese centre-back to [Pep] Guardiola’s team’.

It had been previously stated that Manchester City wanted to get everything done by September 15th, and with that date now passed, they could have been forgiven for moving on.

However, with Ramadani at the helm, that’s now been changed.

The agent is now ‘expected to arrive in Italy next week and, as soon as De Laurentiis is cured of Covid-19, a meeting should be scheduled’. 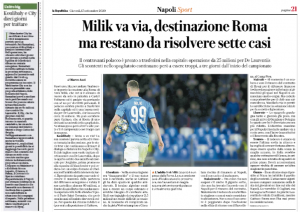 City still haven’t made an offer deemed worthy by the Napoli owner, but with a few extra days now in the bag, perhaps this will be the one?

La Repubblica, down their end, state De Laurentiis wants ‘at least €80m’, but the Premier League club’s offer has ‘not yet exceeded €60m’.

They also reiterate that Manchester City ‘don’t want to deal directly’ with the Napoli owner after the Jorginho fiasco, hence why Ramadani continues his endless travelling between the two countries.