Spending last season on loan at AC Milan, Chelsea’s Mario Pasalic managed to make a bit of a name for himself in Serie A, and while the club he was loaned out to don’t appear to want to make the deal permanent, other teams appear to be interested in his services.

One of the ones who have emerged are Lazio, who recently missed out on Fabio Borini, with Il Tempo saying the club have already enquired with his entourage whether player would be interested in a move, probably temporary, from Stamford Bridge. 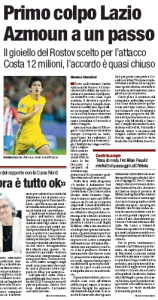 Contacted by fan website Lazionews.eu, Pasalic’s agent explained the situation a bit more clearly, hinting that a deal for the Chelsea midfielder could certainly happen if the interest became something official.

He said: “Lazio is a big European team. I haven’t discussed for Pasalic with them, but I have a good relationship with [Claudio] Lotito and [Igli Tare]. At the moment, however, there has been no official interest.”

Also making it clear that his client would ‘obviously’ be interested in a move to Lazio, we need to establish what ‘official interest’ is.

Enquiring about his desire to join certainly seems like interest, but does that mean it’s ‘official’, or would the club have to contact Chelsea before that label was used?

We’ll have to wait and see, but this is a new story that could very well grow in the coming weeks, especially since it seems unlikely Antonio Conte has any plans to use him next season.