Unai Núñez was linked with a handful of English clubs as his contract situation at Athletic Club Bilbao was unresolved.

Wolverhampton Wanderers, Arsenal, West Ham United, Crystal Palace and Watford are some of the clubs who showed interest in the defender over the last year.

The 23-year-old’s earlier contract had a €30m release clause, making him attractive.

Athletic Bilbao confirmed on Tuesday the centre-back has signed a new contract at the club and his current deal will not include a buyout clause.

According to AS, after ‘almost two years of tug of war’, the La Liga side and the Spain international found an agreement to extend the contract.

The Hammers were keen on signing the player at the start of this year, but he wasn’t keen on joining David Moyes’ side. 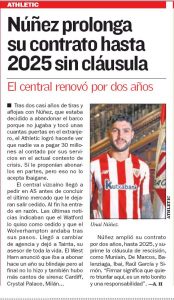 The report states West Ham ‘announced’ they were going to pay Núñez’s release clause a year ago [January window 2020], but they never took that step.

The Wanderers were ‘after’ the Basque club’s defender, while he had ‘sirens’ from the Eagles, Cardiff and Milan.

Núñez, who was ‘determined to abandon’ the Spanish side, has now snubbed all options to change clubs and has committed his future to Athletic Bilbao.

Manager ‘among main candidates’ to replace Bielsa at Leeds – Will...

Chelsea have now ‘asked’ for information on prolific star – Told...