Less than a week ago, AS reported that Leganes have turned down two offers from Brighton & Hove Albion for Youssef En-Nesyri.

The Morocco international has a €20m release clause in his contract.

Rather than paying his buyout clause, the Seagulls wanted to agree a €20m deal with the La Liga side for the 22-year-old. Graham Potter’s side were looking for a workaround to avoid paying extra expenses in signing the African.

‘En-Nesyri rejects Brighton’s offer’ is a headline in today’s edition of AS.

After seven days of talks, the attacker felt that he would be more vital at Leganes than at the English club. Therefore, he ‘declined’ Brighton’s offer.

Mauricio Pellegrino’s side liked Brighton’s proposal, but their intention was to retain the player. 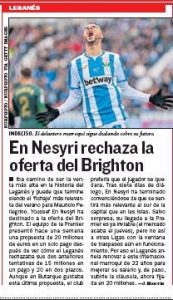 With the Premier League transfer window set to close on Thursday, his arrival at Brighton is unlikely. However, En-Nesyri can still move to other leagues.

Therefore, Leganes are planning to tie him down to a new contract, which will see his salary and the release clause increase.