Manchester United and Manchester City are two clubs who have been repeatedly credited with an interest in Milan Škriniar.

Tuttosport gives an insight into the proposals made by the two Manchester clubs for the Inter Milan defender.

It’s claimed the Red Devils ‘put €65m on the table’ for the Slovakia international, matched by City, and the two offers arrived at San Siro at different times.

The report adds the Nerazzurri turned down proposals from Real Madrid and Bayern Munich as well.

The centre-back has struggled to adapt in a three-man defence this season and has failed to impress since the restart. Therefore, the Serie A side could sell him, if there’s a good offer.

After his performances this season, Tutto warn Inter ‘can no longer ask’ for €80m.

The newspaper states Antonio Conte’s side will have to ‘evaluate any offers to understand what is best to do’ with the former Sampdoria man. However, they don’t specify the figure needed for the signing. 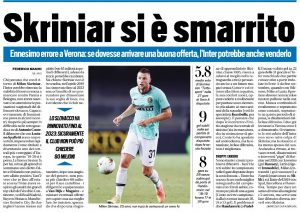 Reports coming out of England have suggested Manchester United could be in the market for a new centre-back in the upcoming window.

With Inter open to letting the defender leave, a possible approach from Old Trafford club cannot be ruled out.