The ex-Leicester City man last featured in November and after undergoing surgery this month, he is set to be out of action for rest of the season. James picked up a hamstring injury against Brighton & Hove Albion on December 29th and will reportedly be out for six to eight weeks.

The situation has seen the Blues look for a new fullback this month and one of the targets named is Sergiño Dest, who can operate on either side of the defence.

On Thursday, Sport explained the west London club have ‘gone all out’ and ‘approached’ Barcelona to know the conditions needed to carry out Dest’s signing in January. There’s also been claims in England about the Champions League winners wanting the USMNT defender. 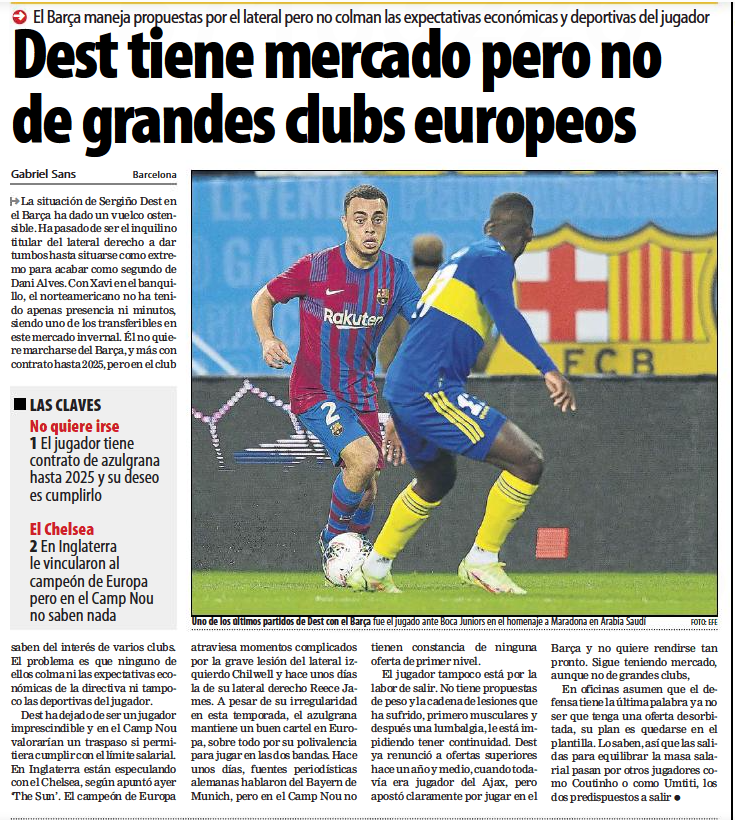 The former Ajax man is no longer a regular under Xavi Hernández and the competition for the right-back slot has further increased after Dani Alves’ arrival.

Mundo Deportivo on Friday claim the 21-year-old is ‘no longer an essential player’, which could convince the La Liga side to cut ties with him this month.

However, Dest ‘does not want to leave’ the Catalan club, and Barca, who are aware of the interest from elsewhere, have not received any convincing proposals so far. There are some offers, but they don’t meet the club’s financial demands.

At Barca, they ‘assume’ Dest will have the ‘last word’ on a potential transfer in January and unless there is an ‘exorbitant offer’, his plan is to stay at the Camp Nou.

Mundo’s report suggests that Chelsea must make an ‘exorbitant offer’, if they wish to take the player away from Barcelona in the winter market.