Home Premier League Chelsea Chelsea have told player ‘how much they love’ him – Blues taking...
SHARE

On January 16th, Sport reported Chelsea have called Ronald Araújo to find out his feelings about making a switch to the Premier League next summer.

The defender was promoted to the first team in 2019 and is now a regular for Barcelona. His current deal runs down in 2023 and the Catalan club have been working to extend his contract.

Marca now claim his contract situation is ‘worrying’ for his employer since he is not close to signing a new deal. Therefore, his ‘future is in doubt’.

The centre-back wants to be recognised and is demanding a new deal, in accordance with his performances on the pitch.

His agent, Flavio Perchman, has already listened to the offer made by the La Liga side. However, it doesn’t meet the demands set by the representative or his client.

Chelsea are likely to be in the market for a new central defender next summer, since Antonio Rüdiger, Andreas Christensen and César Azpilicueta have their contracts expiring at the end of the season. 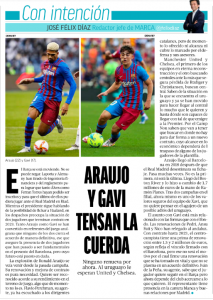 The Blues know the situation in which the player finds himself at Barcelona and have ‘already moved’ to make the Uruguay international aware of ‘how much they love’ him and ‘how far they are able to go’ to bring him to England.

Barca would not be in a position to offer a much improved deal to Araújo, unless they sell one of their own players first.

While Chelsea are waiting for the South American, Barca are having an uphill task to secure his long-term future.