Home Europe ‘Advances are being made’ – Manchester United continue path to signing 2...
SHARE

Manchester United were the only English club who had scouts at the Portuguese league match between Benfica and Belenenses last night.

And as reported by local newspapers Record and O Jogo, the Red Devils had two targets to be watched on the pitch: Ruben Dias and João Félix.

Record says ‘advances are being made’ by Manchester United on both signings, despite the headline €180m cost when related to buyout clauses.

Although it’s more usual for Dias to have a secure game and for Felix to have the normal ups and downs of a 19-year-old, the opposite happened in the 2-2 draw last night. 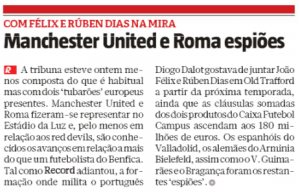 Dias, 21 years of age, didn’t have his best match, committing an unnecessary foul which led to Belenenses’ first goal, and missing a pass to goalkeeper Odisseas Vlachodimos which resulted in a a gift for the away side to score the equaliser.

Felix, on the other hand, despite not getting an assist or a goal, was consistent in creating chances for the team, constantly having the ball at his feet.

As Manchester United continue to scout practically every performance of the duo, the club will certainly have very complete reports before taking a decision in the summer… although the Portuguese media believe the club certainly wants them.