According to Milliyet, Fenerbahce are in ‘advanced negotiations’ to sign Marco van Ginkel from Chelsea on loan.

This week the Turkish club confirmed Phillip Cocu will be their new manager and Milliyet say one of the first names on the Dutch coaches’ agenda is Van Ginkel. It’s reported Cocu is working hard to sign the Chelsea midfielder.

Cocu has reportedly told Fenerbahce sporting director Damien Comolli that he wants to work with Van Ginkel once again, following their two seasons at PSV, and Milliyet say the Turkish club are progressing with talks to sign the Chelsea player. 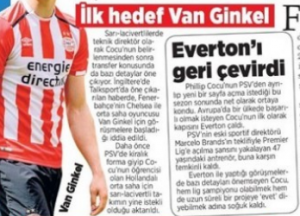 Van Ginkel and Cocu won the league title at PSV last season and the 25 year old was influential, scoring 14 league goals in the last campaign.

The Dutch midfielder is unlikely to have a future at Chelsea and the Premier League side look prepared to loan him out for another season or sell on a permanent deal.

Van Ginkel is under contract at Chelsea until 2020.