It doesn’t matter if FIFA allow Adrien Silva’s transfer to Leicester City this summer or not. The move is done, and it was proven on Monday as the player went to say goodbye to his old teammates.

As reported by Portuguese newspaper Record today, the midfielder showed up at Sporting’s training centre on Monday afternoon, but didn’t take part in the session as he was only there for his farewell.

Silva went to get his personal stuff and say goodbye to the club where he spent more than 15 years, before returning to Leicester. 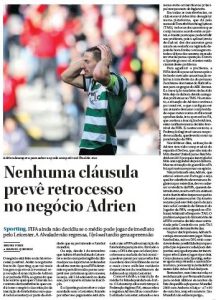 Diário de Notícias also has a story on the case today, saying that Leicester City have already paid part of the fee.

They confirm that there are no clauses allowing the deal to collapse, and even if FIFA do not accept the documentation, Adrien Silva will join Leicester now and only be available to play in January.