Adrien Rabiot wants to join Everton this summer but his ‘huge salary’ poses a problem for the Toffees.

That’s according to L’Equipe, who say Juventus are keen to get rid of the Frenchman this summer and have been touting him around Europe in an effort to find a buyer.

Rabiot has had a disappointing first campaign in Italy after joining on a free transfer from PSG last summer, and his relationship with the club has reportedly soured in recent months.

That’s largely due to wage cuts imposed by the Italians amid the coronavirus epidemic, something it’s claimed his entourage, and chiefly his mother and agent Veronique, did not take kindly to.

They are also unhappy with Juventus’ efforts to sell him, with Juve calling his attitude into question as the player didn’t return from isolation sooner, unlike several of his teammates.

It’s worth taking those claims with a pinch of salt, for reasons we’ll explain in a few paragraphs time.

A sale is looking likely, and Juventus are keen to include him as part of a deal for someone else, so have already proposed he be part of deals for Jorginho at Chelsea, Paul Pogba at Manchester United and Arthur at Barcelona.

Juve chief Fabio Paratici is particularly focused on United, with his hope he can include Rabiot to bring down Pogba’s asking price significantly.

Rabiot, though, wants to be ‘master of his own destiny’ and do not want Juventus to put any pressure on them when it comes to choosing a new club. 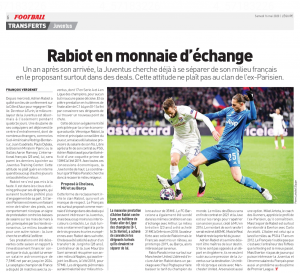 They have a ‘mutual interest’ in Manchester United, while Arsenal is another option, but Rabiot’s hope is to secure a move to Everton and reunite with Carlo Ancelotti.

It was the Everton boss who handed Rabiot his debut when he was 17-years-old at PSG, and he feels that the Italian is the best man to help him re-launch his career.

However, Everton don’t have any players Juve want and Rabiot’s salary of €7.5m a year ‘poses a problem’ for the Blues.

Quite how L’Equipe know Rabiot’s inner thoughts, however, is anyone’s guess. In fact, it’s doubtful that they do.

For example, this week, they ran a piece that mainly criticised him for not returning to Italy, only for it to be revealed he was returning that very day.

That would suggest their inside knowledge on the player is limited at best and talk of any desire to join Everton is pure guesswork on their part at this moment in time.