Barcelona won the race to sign Frenkie de Jong after they agreed a deal with Ajax and the midfielder will move to Camp Nou after this season.

Adrien Rabiot was another midfield target. He has less than six months left on his contract at Paris Saint-Germain and several questions have arisen regarding the La Liga winners’ interest in the Frenchman after their acquisition of De Jong.

Sport now claims the Blaugrana are still keen on the 23-year-old.

When it came to the Dutchman and Rabiot, it was not a choice of ‘one or another’ because the Catalan club were working on both operations in parallel.

The Ligue 1 player is still considered as one for the present and the future, but he is no longer the priority for Ernesto Valverde’s side.

Rabiot is represented by his mother Veronique Rabiot and they already have the offer of Barcelona, which includes a €10m signing on bonus if he arrives on a free transfer.

The report mentions the PSG contract rebel has several other options, Tottenham Hotspur, Chelsea and Juventus are also in the race to sign him.

Barcelona will be happy to receive Rabiot if he ‘shows signs of wanting’ to join them over proposals he has from other clubs. 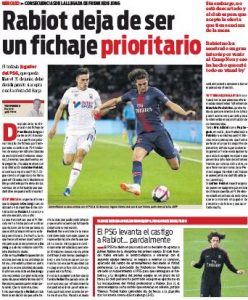 Will he continue with Thomas Tuchel’s side until the end of the season or join another club in January?

The outcome will be found out is less than a week’s time.