Alisson Becker picked up an injury in Liverpool’s season opener against Norwich City and Adrián was immediately called into action.

A few days later, the Spaniard was the Reds’ hero in Istanbul as he helped his side overcome Chelsea in the UEFA Super Cup on penalties.

Simon Mignolet was frustrated with lack of opportunities last term and the goalkeeper left the Champions League winners for Club Brugge on August 4th. A day later, the Merseyside club confirmed Adrián’s arrival on a free transfer.

West Ham United released the 32-year-old in the summer as his playing time with the Hammers was restricted last season, after Łukasz Fabiański’s arrival at the London club.

AS interviewed Adrián and when discussing about how a move to Liverpool materialised, the Spaniard also explained why he left West Ham.

“The thing with Liverpool goes way back. The scouts had already contacted my representatives and checked the option to sign me, but it could not be done,” he said.

“I had a contract with West Ham, and it was in its last year, the least fruitful, when things changed.”

“I played practically nothing in the league and negotiations to renew did not end well. But, finally, my decision to leave was the most accurate and it allowed me to change clubs.”

“I had several offers from Spain, some of them were advanced and also in other leagues.

“But when I got the offer from Liverpool, there was hardly anything to think about. They told us that they could sell Mignolet and I was the first option. If I said yes, they would not continue searching in the market.”

“I just had to introduce myself in Liverpool. It was all done very quickly. In just two weeks everything happened.” 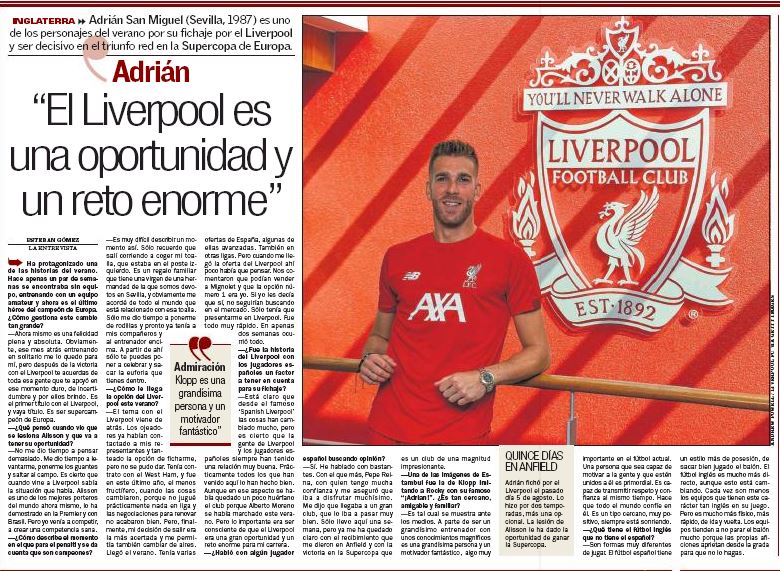 Adrián also revealed he had a chat with his compatriot and former Liverpool goalkeeper Pepe Reina, before moving to Anfield.

“I have spoken to quite a few. Most of all, Pepe Reina, with whom I am very confident and he assured me that I would enjoy very much [at Liverpool]. He told me I was going to a big club and I will have a great time,” Adrian explained.

“I’ve only been here a week, but I’m already aware with the reception I got at Anfield and with the victory at the Super Cup, that it’s a club of enormous magnitude.”

Adrián’s heroics in the penalty shootout proved to be the difference between Liverpool and Chelsea in the Super Cup. Jürgen Klopp was in full praise of his keeper and went on to imitate Sylvester Stallone’s famous cry as Rocky Balboa.

AS asked the keeper if Klopp is ‘so close, friendly and familiar’. He said, “It is as shown in the media. Apart from being a great coach with great knowledge is a great person and a fantastic motivator, something very admiring.”