Just like we covered on Sunday, the newspaper claims that Benfica are trying to get him on a bargain, while Everton are another club who could attempt to sign him in the summer.

With Espanyol demanding €15m for the player, the Eagles consider that to be too much, and are set to have a meeting to try and decrease that price.

It must be said that in Spain the asking price has been put at €20m.

Meanwhile, Everton are seen as the biggest threat in the race, as the Toffees would be willing to bid more for the the 21-year-old. 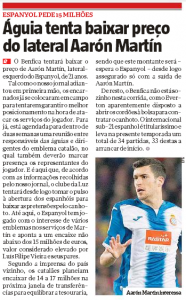 An interesting detail in the story is how they claim Everton are prepared to spend a lot on this signing.

In Sunday’s story, they’ve taken claims that the Toffees could be offering up to €30m, which we pointed out as quite strange. Now they insist their bid could be high, although no figures are mentioned this time.

The way Record writes makes it clear that Everton can win the race if they want to, as the budget seems much better.