Amadou Diawara rumours won’t be the most popular among Wolves fans.

They pop up every now and again in Italy and the gist is usually: Wolves really want the player but he’s not interested in signing for the club.

This week has seen something of a peak in the claims.

After several reports, there were claims on Wednesday that Wolves have made a €30m offer for the Napoli player.

That offer was delivered by none other than Jorge Mendes, the club’s go-to transfer help.

And yet still Diawara was presented as not fussed. 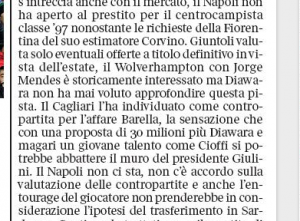 It’s worth pointing out that these claims are not only coming from usual rumour sources, but also newspapers who don’t usually jump head first into such things.

Corriere del Mezzogiorno, a local paper for the Naples region, explains Napoli will considered offers in the summer, and that Wolves have been interested for some time.

Il Mattino, also in the Naples region, says there’s been ‘attempts’ by Wolves, but they’ve all ‘failed’ so far.