There’s a story building in the Italian media over Chelsea and Max Allegri.

The claims originated from Quotidano Sportivo, a sport pull-out found in several major Italian newspapers. In their Tuesday edition, they state Roman Abramovich is ‘courting’ the manager, with the idea being the Italian would be lined up in case Frank Lampard is shown the door.

Chelsea spent big in the summer transfer window and have only won two of their five Premier League matches so far. That’s brought some criticism for Lampard, who had been enjoying quite an easy ride when it came to the media.

According to the report, Abramovich ‘wants to win’ and won’t let sentiment stop him if he feels Chelsea need a change in management.

Allegri’s last job was with Juventus, who he left in June 2019. Whilst they still won the league last year, the Serie A club haven’t been doing as well as they’d like. Maurizio Sarri was dismissed and Andrea Pirlo brought in, and after five matches Juventus find themselves fifth in the table. 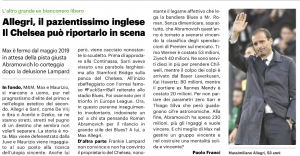 During his time with the Old Lady, Allegri won five Serie A titles, picked up the Coppa Italia four times, and got to the Champions League final twice. Before that he’d also won the league with AC Milan.