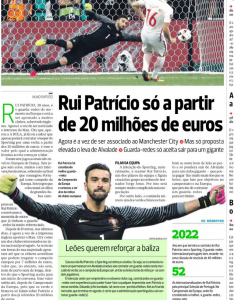 Manchester City have already learned the conditions to sign Rui Patrício from Sporting, according to reports from Portugal.

Record say the Lions would sell the goalkeeper for at least €20m, as his great performances at the Euro attracted interest from several European sides.

In the past few days, besides Everton’s interest, the English press also reported that Manchester City could land the goalkeeper for only €7m. So A Bola’s story is basically a response to that.

Just like Sporting want to keep him, Patrício wants to stay as well. But if he’s going to leave, A Bola says he has a few conditions to accept it: The new club needs to be a giant one, who can pay him much more than Sporting.

That sounds fair enough to us.

He also wants his new club to fight for league and European trophies, and whoever signs him needs to be seeking a goalkeeper to be the number one.

It really sounds like a clear message for Manchester City, doesn’t it, Patrício? What a coincidence.