Lucien Favre has revealed that the offer from Crystal Palace last summer simply came ‘too early’ for him to accept it.

Favre was one of the leading candidates for Crystal Palace in the summer when the Eagles were on the hunt for a replacement for Roy Hodgson.

At one point, he appeared to be the leading candidate for the job, holding several talks with the club and seemingly on the brink of taking the job.

However, that never happened, with Favre instead pulling out of the running in a late U-turn that took many by surprise.

The turnaround came after he had been offered a three-year contract to take charge at Selhurst Park, although it was never made clear why he had elected to do so.

It’s not affected Crystal Palace too much as they instead hired Patrick Vieira, who has had something of a transformative effect on the team and has enjoyed a good season so far.

Favre, meanwhile, remains out of work but is ready to return and discussed his rejection of Crystal Palace in a recent interview with L’Equipe. 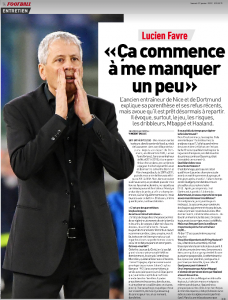 “It was too early,” he told the newspaper.

“They said to me: “What more do we have to do?” But nothing, it was only a question of timing. Six months off was too little.

“But the discussions with Palace were magnificent, and I’m happy for Patrick Vieira that he’s there. He has really good managers.

“I told them I could withdraw from the discussions at any time because it was coming too quickly. That would not be the case now.”