Maybe there’s some kind of unwritten rule which means that when Arsenal are struggling, William Saliba is on the rise, and when the Gunners have a brilliant day, the Football Gods then take power away from the defender.

Sunday saw Mikel Arteta’s men take Tottenham to pieces in the derby, with Arsenal racing into a 3-0 lead. It could have been worse early on for Nuno Espirito Santo’s side, who looked all over the place and didn’t seem to have much fight, in contrast to the home side’s performance.

Things got a little better towards the end for Spurs, perhaps as Arsenal took their foot off the gas, and Tottenham made a late attempt to get back into the game.

When picking out their flops of the match, L’Equipe choose two players, one of which was Saliba. The defender is said to have been at fault for an early Lens penalty, and continued to flounder from there. 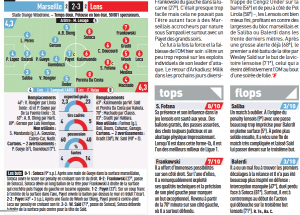 In typical L’Equipe fashion, he was given a brutal 3/10 rating. The French newspaper say it was a ‘match to forget’ for the Arsenal player, currently on loan at Marseille, and it’s all in huge contrast to the praise of recent weeks.

This one can probably be put down to experience, rather than the meddling of the Football Gods.