Federico Fernández arrived at Newcastle United from Swansea City in 2018 after the Welsh club were relegated from the Premier League in the 2017/18 season.

A move to the Tyneside club initially saw him reunite with Rafael Benítez as the defender had previously trained under the orders of the Spaniard at Napoli.

Steve Bruce replaced Benítez in 2019, and the 31-year-old has appeared in a greater number of games under the current manager.

Unfortunately, his performances for the Magpies haven’t earned him a call up for Argentina. The centre-back’s last competitive appearance for the national was during the 2014 World Cup in Brazil, where La Albiceleste lost to Germany in the final.

The Copa América has been postponed to next summer due to the coronavirus crisis, and the Newcastle player remains hopeful his performances in the Premier League can help him represent his country again.

“I like the work La Albiceleste manager Lionel Scaloni is doing and also the group he has set up,” Fernández said during an interview with Tuttosport.

“It is clear that he sought the replacement and integration of young people. The qualifiers for Qatar 2022 started well by winning against Bolivia, which is anything but easy. Yes, in my opinion we are favourites for the Copa América.”

“I don’t deny it: I would like to return, sooner or later, to the national team. I’m 31 years old and I’m doing well in the Premier League.”

Fernández has the experience of playing in Argentina, Italy, Spain and in England and he’s detailed why he prefers the Premier League over others.

“Between the heat in Argentina, in Italy, in Spain and here in England, well, I choose the Premier League,” he explained.

“Mind you, they are four competitive leagues, but my preference was for English football, perhaps also because here I am now in 7th year: practically a veteran!

“In addition to this, I consider football in England to be seductive, attractive, dynamic. Technique and physical strength are needed, here the best play. This is why it is an honour and a pleasure to be in the Premier League.

“It is not just a competitive discourse, mind you: it can be seen in every aspect of the 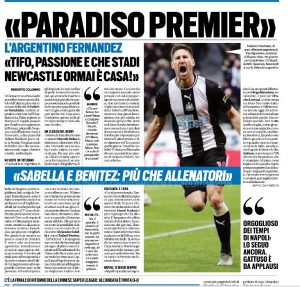 profession. The English are at the forefront and it is also evident in the passion: the fans fill the stadium in every row of seats.

“Economically, then, they are fine here and even the small clubs or the newly promoted ones have the opportunity to buy great players and to play almost equally with the top teams. Believe me, this cannot be seen in the European leagues and beyond.”