Ahead of Chelsea’s match against AS Roma in the Champions League, Alvaro Morata has been speaking to Gazzetta dello Sport as part of their build-up.

There’s really no better Chelsea player for Gazzetta to talk to ahead of the tie, given Morata’s time playing for Juventus in Serie A, and his love of the Italian game.

Asked how he ended up at Stamford Bridge, and how he’s settled so well since making the Premier League move, Morata explained: “I’m in debt with Conte. He had taken me for Juve and then left for Italy. When I knew he wanted me, I didn’t think twice.

“There were a number of favourable situations. The first was the coach: I knew Conte and I had no trouble finding myself in his football ideas. The second is the environment: I was very well received by my companions. The presence of a Spanish enclave, with Azplicueta, Alonso, Fabregas and Pedro, made things simpler. The third is my wife Alice Campello: she followed me to London.”

Asked why, given how much he loves Italy, he returned to Real Madrid, Morata explained it wasn’t really his choice: “I came as a boy, I went away as a real player. Italy for a Spaniard is the best country to live. You have everything: beauty, history, art, cooking, fashion. I would never have left Italy and Juve.

“There were contractual agreements to be respected. The disappointment was enormous: I found myself back to the starting point. They treated me like the boy I was before the two Italian seasons.”

That may explain why Morata was so keen to leave Madrid during the summer, despite having a potentially increasing role at the club.

Clearly feeling that Conte treats him 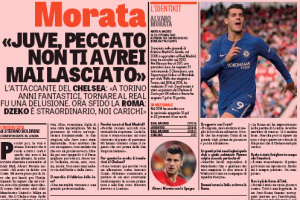 better, and respects him more as a footballer than was the case with some at Madrid, Morata added: “I came here because there was a coach like Antonio Conte. We started talking about my eventual transfer last spring and I finally came to London.”

Gazzetta dello Sport asked the Chelsea star if he misses Italy, and whilst he was always likely to confirm doing so, it’s also likely Morata’s comments will be twisted into something more negative towards London: “Very. My wife would like to live in Spain, I in Italy. Here, we can find a compromise.”