Home Premier League Chelsea 25% chance of Conte leaving Chelsea in the summer after reports of...
SHARE

On Monday, we covered a rather extravagant story in Gazzetta dello Sport regarding Inter Milan’s interest in Antonio Conte to take over from Stefano Pioli for the 2017/18 season.

While a lot of these stories tend to be pure speculation, the Italian newspaper seemed pretty convinced the Serie A side were prepared to chuck as much money as possible at the former Juventus manager to convince him to leave Stamford Bridge. 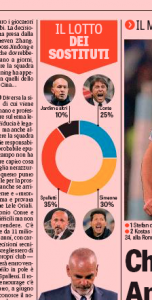 The man in charge of Chelsea’s first-team appears pretty happy in London, currently on course to potentially win both the Premier League and the FA Cup in his first season in England.

However, if Gazzetta’s reports of Inter Milan willing to pay him €55m over five years to be their new manager, things could change a little.

Of course, money isn’t everything in football, but it plays a big part.

The same newspaper look at the situation once more on Tuesday, and evaluate Inter’s chances of actually getting the manager they want next season.

Using one of their usual pie charts, they reckon the Italian club have a 25% chance of getting Conte for next season, with Diego Simeone at 30% and Lucian Spalletti the favourite at 35%.

Frankly, we don’t see Conte leaving after such a good first season in England and with Champions League football next year, but we wouldn’t be doing our job if we weren’t telling you what the big stories are abroad, and this is one of them.