Home Premier League Arsenal 24 year old to rock up at Arsenal in the summer, leaves...
SHARE

As Sporting CP start to realise they won’t be able to achieve great things this season, it’s time to think of what went wrong.

The club were last in their Champions League group, got knocked out of the two cups in Portugal and are third in the league table, twelve points behind Benfica.

The summer transfer market sounded exciting at the start, especially because apart from the permanent signings, Sporting managed to get loans from two big clubs. They took Lazar Markovic from Liverpool and Joel Campbell from Arsenal until the end of the season. 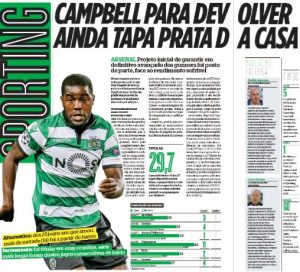 As we saw, Markovic failed to impress and was sent back to England after only six months at the club. And now it’s time for Arsenal owned Joel Campbell to go the same way.

According to O Jogo today, Sporting had planned to try and sign the Arsenal player permanently next summer. But due to his disappointing season, this possibility is now ruled out.

Campbell has three goals and four assists this season, but only managed to start four straight games once. The fact that he came on during a match last weekend has even upset some fans, who wanted a chance for the homegrown players instead.

Sporting planned to pay Arsenal something between €10m and €15m, but unless he plays like Lionel Messi or Cristiano Ronaldo until the end of the season, the Portuguese club are not bidding for him.

Arsene Wenger will have to decide what to do with the 24 year old in the summer, with the Costa Rican having another season left on his Arsenal contract.