The 24 year old has been in excellent form for Trabzonspor this season, and his performances have caught the eye of some of Europe’s biggest clubs, including Tottenham.

Fotomac report Jose Mourinho is looking to sign a new goalkeeper this summer, and Cakir is currently topping his list, but the likes of Ajax’s Andre Onana and Lazio’s Thomas Strakosha are also on his radar.

However, it’s reported Cakir is the most realistic target Tottenham could get because the other two could be costly to Spurs in comparison to the Turkish goalkeeper. 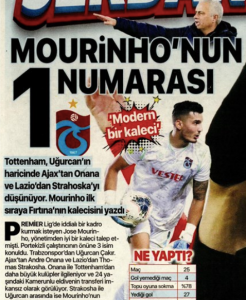 Cakir has been linked with a move to Premier League with the likes of Liverpool, Leicester City and Chelsea all said to be interested in recent months.

The Turkish international’s contract with Trabzonspor will expire at the end of June 2024.