In January German magazine SportBild credited Tottenham and Arsenal with interest in Maximilian Philipp. The 23 year old attacker was held aloft as one the brightest young things in the Bundesliga, and therefore Arsene Wenger and Mauricio Pochettino showing interest would be no surprise.

In their magazine this week, SportBild have an interview with the SC Freiburg player, so it was natural to ask him about Tottenham and Arsenal.

SportBild put the interest to Philipp, who responded: “Naturally every player – including me – has the dream to play in the Champions League one day. England was always my goal. I loved the football and the fans. But I think now the Bundesliga has overtaken the Premier League technically. And I can also imagine staying in Freiburg forever.”

Whilst Tottenham and Arsenal may both be in a position to offer the dream opportunity of Champions League football next season, Philipp certainly doesn’t sound in a rush to move. 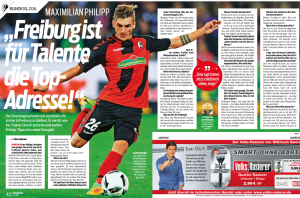 It’s unlikely SC Freiburg will be in the Champions League anytime soon, so Philipp will likely have to work out what his priorities are.

There’s no suggestion of Wenger or Pochettino making a move for the player soon. The interest, even though SportBild put it to Philipp, would seem to be weak at this stage.