This week’s edition of SportBild has a short report on Leeds United having VfL Wolfsburg’s Josip Brekalo on their transfer agenda for this summer.

Apart from starts, his goal contributions also improved as he finished the campaign with seven goals and three assists in 29 league matches.

The winger has two years left on his current deal and the report states he ‘keeps flirting with saying goodbye to Wolfsburg’.

The Bundesliga side are in favour of sanctioning his sale in the summer, as long as they receive a fee around €15m. 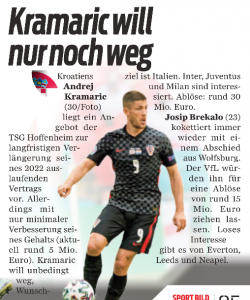 Marcelo Bielsa’s side get a mention when discussing potential suitors as SportBild state Leeds, Everton and Napoli have some interest in the player.

Brekalo is ‘flirting’ with a transfer and his employer ‘would let him go’ for the aforementioned figure.

Leeds are in the picture and it remains to be seen if their interest will be converted into something concrete in the coming weeks and months.