Southampton have been heavily linked with Marlon Santos over the past couple of weeks or so. The Brazilian was sent out on a two-year loan deal to OGC Nice by Barcelona last summer.

Mundo Deportivo reported on June 25th that West Ham were in ‘pole position’ to sign the centre-back this summer, and he’d been brought back from Nice. At the start of this month, we carried a report from the same newspaper, who claimed Southampton had joined the race for the South American defender.

Instead, they talk about the Saints’ interest in the player. It’s claimed ‘Marlon was very advanced with Southampton’. However, the two clubs have not yet agreed a fee for the 22-year-old. 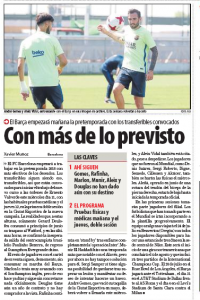 have so far failed to find an agreement which can make Santos’ move to England official. Ernesto Valverde has a list of players he wants the La Liga winners to offload in the summer transfer window and Marlon is one of them.

If the interest is as serious as presented then there’s surely a way to get this one done.